/ A Photo Essay: for clarity and fun

Bhagavad-gita: A Photographic Essay, a visual guide to the world’s greatest spiritual dialog 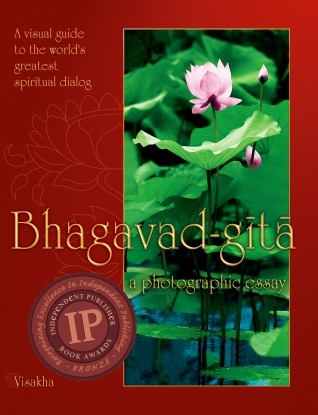 “Visakha has made another unique contribution to our study of the spiritual traditions of South Asia. Her illustrated summary of the Bhagavad-gita, the single most influential text of Indian wisdom, comprehends and effectively communicates the timeless relevance of the Gita within a a contemporary context.”

(To read the caption, place your cursor over the picture below.) 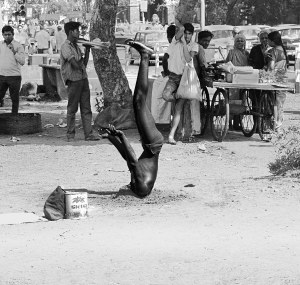 The Bhagavad-gita, or God’s song, is a classical sacred text that comes to us from ancient India. Indeed, the Bhagavad-gita is a “song” (gita), as its text is found in flowing Sanskrit verse. Yet, the content of this poem takes the form of a conversation between the Supreme Lord Krishna (the bhagavat), and his dear friend Arjuna, who is confronted by universal existential questions that continue to challenge humans: What is my purpose in life? What should be the values by which I can make critical life decisions? What constitutes true happiness and fulfillment while in a world of moral conflict and degradation? What is the ultimate reality and what is my relationship to it? These are just some of the questions to which this text poses answers.

Often called the “Hindu” Bible, the Bhagavad-gita is the most loved and adored philosophical text arising from the ancient culture of South Asia. This text is a 700-verse section within the largest epic poem in the world, known as the Mahabharata, a magnificent epic poem at least seven times the length of both Homer’s Iliad and Odyssey combined! One remarkable fact about the Bhagavad-gita is that it has captured the minds of and has fascinated non-Indian peoples, especially in the English-speaking world. There have been literally hundreds of translations of the text published in English alone, which is evidence that the voices from ancient India are still speaking to us in modern times.

The present work, however, is a unique presentation of key philosophical ideas and understandings of this great text. The author of this work has presented select topics and themes of the text and has explained them with the aid of photographic illustrations.  Specifically, she draws from the translation and commentary of the Bhagavad-gita by A. C. Bhaktivedanta Swami Prabhupada (1896–1977), entitled, Bhagavad-gita As It Is. The reasons for this choice may be considered here. One, it may be that Prabhupada’s translation and commentary, distributed by the International Society for Krishna Consciousness, is the single most widely known translation in English, as well as numerous other languages. It makes sense that the present work would focus on such a celebrated translation. Two, this translation is what I would term a “living translation” of the text, in that it is not merely the philological exercise of a specialist; rather, the Swami’s work was translated clearly with the idea that it would be applied in the everyday lives of persons. Indeed, the Swami’s mission was itself the cause of the worldwide spread of Vaishnava thought and practice in all major cultures of the world. Finally, the author herself, Visakha, a direct student of Bhaktivedanta Swami since 1971, has been practicing for many years the way of life that is prescribed in the Bhagavad-gita and in the Swami’s commentary.

We are greatly benefitted by the way Visakha brings together the areas of art and religion from her own life to create the present work. The author harnesses her talents both as an accomplished writer and as a professional photographer (originally trained at the Rochester Institute of Technology). Combined with these talents are her years of dedicated practice of bhakti-yoga, or the practice of living a life in loving devotion to God under the guidance of this century’s leading global teacher of Bhagavad-gita, Bhaktivedanta Swami.

The ancient, yet universally relevant message of the Gita is extended to us in the modern world through Visakha’s clearly articulated understanding along with her powerful photographic expression of its message. I recommend this work to devotees of the religious traditions of the Gita and to academic students of the Gita, as well as to all those who desire a glimpse into the mystical vision of the Gita, as it is so eloquently pre- sented herein.

Order your copy of Bhagavad-gita: A Photographic Essay here:

* The Independent Publisher Book Awards were conceived in 1996 as a broad-based, unaffiliated awards program open to all members of the independent publishing industry. The awards are intended to bring increased recognition to and reward those who exhibit the courage, innovation, and creativity to bring about change in the world of publishing. In the Inspirational/ Spiritual category in 2011, an  award went to Bhagavad-gita: A Photographic Essay by Visakha.